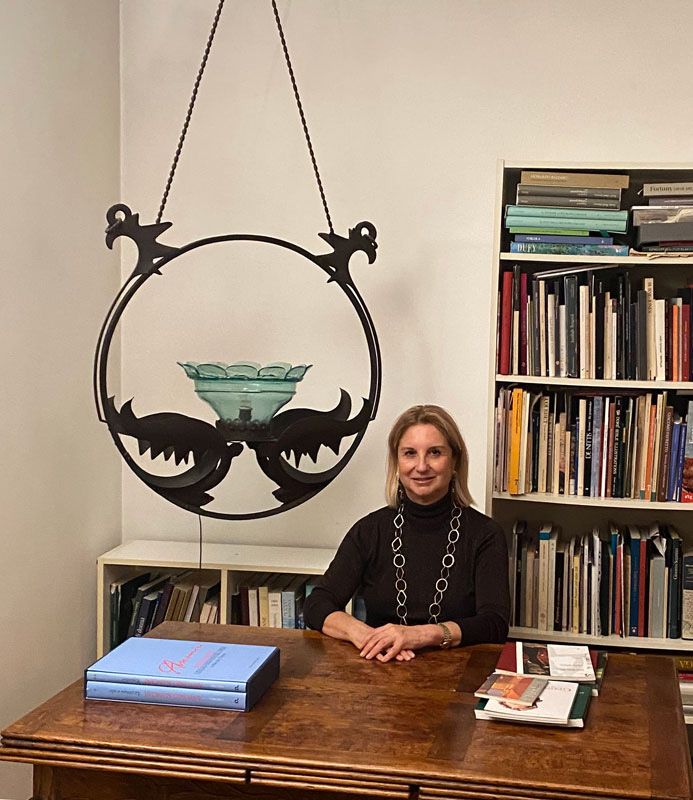 Born in Vicenza, she has always lived and worked in Rome. She is married and has one son. Optimistic, heedful of physical and mental wellbeing, she is attracted to Eastern philosophies and the Steiner school of thought. A vegetarian since childhood, she loves nature and animals.

Art has been a veritable vocation in her life. Passionate about art since childhood, she would draw, paint and visit churches and museums, admiring the works of the great masters. She attended the “Liceo artistico” in Ripetta street and the 'Scuola Libera del Nudo' of the Academy of Fine Arts, acquiring her initial knowledge of artistic techniques. These schools put her in contact with great artists who are no longer with us, including: De Chirico, Turcato, Monachesi, Nato Frascà and Nicola Carrino.

When she enrolled in the art history course at “La Sapienza” University, her mind and expectations were expanded under the influence of two professors who played a key part in her education. Corrado Maltese made her understand the importance of philological analysis and of examining in depth the technical side of the work of art. In his lectures Maurizio Bonicatti stressed the connections between art and psychoanalysis, allowing her to develop a critical vision and think outside the box.

After graduating in History of Mediaeval and Modern Art, she initially focused on Italian art from the 13th to 18th century, in particular collaborating with the Ministry of Cultural Heritage, undertaking research and cataloguing works of art from the Latium region, and giving guided tours and conferences in Rome's Galleries of Ancient Art. She obtained a postgraduate degree at the University of Urbino and, thanks to a thesis on painter Stefano Ussi, began to focus on 19th century Italian art, an area that would go on to fascinate her, becoming an expert on that period. She also took a keen interest in the relationship between western and eastern art, conducting research on the topic for two years thanks to a CNR (National Research Council) scholarship.

She passed the competition (based on qualifications and examinations) called by the Municipality of Rome, and was appointed curator of the Roma Capitale Modern Art Gallery (a post she continues to hold), working for the safeguarding, conservation and enhancement of the museum's cultural assets. In this capacity her interest in 19th century collections increased, resulting, among other things, in two volumes of the catalogue " Autori dell’Ottocento” (“19th century artists” ) and in the subsequent exhibition and catalogue: “Artisti dell’Ottocento / Temi e riscoperte”  ("19th century artists/themes and rediscoveries").

She became more and more interested in interpreting works of art, studying and uncovering even the most obscure aspects of the philological message and related methods and techniques, as well as their market value.  She has gone to great lengths to spot forgeries, a great scourge of the national and international art market.

The experience acquired in the areas of authorship attribution, art criticism and market value led to her requesting a part-time role as museum curator in order to also pursue the profession of "art advisor". As a result, she was asked to provide technical consultancy to the Court of Rome on a regular basis, authenticating, identifying and valuing numerous works of art and assessing and dividing up entire collections owned by important historical families. She also advised private individuals, insurance companies, antique dealers, art galleries and auction houses in Italy and abroad, as well as banking institutions. In the purely scientific field she turned her attention to 19th and 20th century painting and sculpture in Rome and Naples, and in the centre-south of the country in general.

She also prepared exhibitions, catalogues and papers relating to these topics. These include: Vincenzo Gemito, Ettore Ximenes and, above all, Antonio Mancini, becoming over time the owner of his valuable archives. She has devoted a long period of her life to the study of these archives, resulting in the recent publication of the two volumes of the Catalogue Raisonné of paintings, and she is now cataloguing the master's drawings, pastels and and other art forms.

For info & contacts: This email address is being protected from spambots. You need JavaScript enabled to view it.